I came home tonight to an especially warm apartment. At the time, I just chalked it up to the sometimes-flakey heat and the fact that Joni had just showered. Here we are, 4 in the morning, and the heat has not shut off at all. The hiss of steam heat has been our constant companion.

This is a picture of the only thermostat in the apartment; it's pointing at a balmy 82°. We haven't been this warm since August.

I went downstairs to see if I could find any obvious reason for the heat to be on, and it seems the main thermostat believes it's 35° inside. Perhaps a call to the landlord is in order.

Please please dear Lord please do not give any ground on the topic of telecom immunity!

I understand that there is a fair amount of pressure being applied by the White House to extend retroactive immunity to telecom companies for the breach of privacy rightsunder the Protect America Act, but it is imperative that you and your fellow members of the House do not allow that to happen. The failure of the Senate to act responsibly makes this much harder, I'm sure.

The Executive must know that its duty begins and ends with upholding the law of the land. Interpreting and selectively adhering to the law is not part of its charter. Allowing such abuse of power makes the role of the other branches of government irrelevant.

One last thing I'd like to mention: it seems to me that the needs provided for by the Act are better served by the older FISA, which ensures some level of judicial oversight while still allowing for proper intelligence gathering. Don't let the rhetoric of an "unsafe America" deceive you into granting unneeded legal loopholes for the systematic violation of privacy rights.

Thank you for your time; keep fighting the good fight.

For the record, I love Joni. She is awesome. She is the best wife I've ever had. Yes, it's (women who have been my wife) a short list, but that doesn't make it any less true.

This is not because she just mentioned that Mario mentions D in his posts, though it is an interesting coincidence.

I totally make the sweet love to her because she is beautiful and I like to hit that. Awww yeah. You don't get to because I'm not good at sharing.

P.S. I met John Norstad today. Follow the link if you don't understand why I think this is awesome. If you still don't get it, don't worry. I'll not secretly judge you. To your face. I'm also privileged to work with John's son, which is fun in and of itself. Jeremy's a cool guy and I'm glad to know him. We talk about things best unsaid in polite conversation.

Sometimes in a movie, or TV show, or comic strip, someone is having trouble dealing with reality. Invariably, someone else says "You're not dreaming. This is really happening." - or something else to that effect. Why doesn't the person who feels he/she is dreaming fight that? If you already think it's a dream, why would someone else telling you that it's not a dream put you at ease? It's just that same bad dream trying to make things worse.

In other words, if you ever feel that life is getting a bit too surreal but a friend tells you "No, you're not dreaming," kick them. In the nut.

After all, if you give in and accept your deluded senses as reality, the dream wins. Keep on believin' it's not really happening. Eventually you'll wake up.

By the way, as of this moment, it's only three more calendar days until I'm married. Bring on the strippers.

If the above doesn't make seems incoherent, let me know. I's tired.

I am posting this from my new iPhone. Yes, this means I can update my journal from anywhere. I can, but I most likely won't. Sorry.

Mercieca told the AP in Rome that he and Foley would go into saunas naked when he was a priest in Florida and Foley was a parishioner, but he said "everybody does that." The priest also said he didn't think it was unusual to go on overnight trips with a young boy.

I do think it's rather lame that Foley (and/or his handlers) is trying to shift blame. Wasn't that tactic played out in the 90s, if not the 80s? "Yeah, I did some bad things, but I'm not really to blame because someone wronged me earlier in life." Following that to its logical conclusion, we can all do just whatever we want thanks to the psychological damage done by Adam and Eve.

I know I'm certainly not responsible for my misdeeds. I will, however, be taking credit for any and all successes.

Myself: You should get into business producing teflon-coated condoms
Myself: And run the lube companies out of business
Doug: ... but teflon transfers heat :-(
Myself: That's okay, isn't it?
Myself: more "natural feeling" and such
Doug: you still generate heat from friction
Doug: ... you do know how sex works right? ...
Myself: hehe yes
Doug: I can send you to a site that has videos
Myself: haha

IN CASE YOU WERE WONDERING about how a kitty would react to a dab of wasabi in her mouth, I have saved you all the hard work.

Yes, in the name of science, I "persuaded" the kitty to have a little bit of that wonderful green stuff.

In fact, she made various startled motions, foamed a little, and seemed slightly perturbed.

Of course, you're welcome to try to reproduce my findings with your very own kitty, or perhaps some other pet-type-animal you have in the near vicinity. After all, real science needs verification. 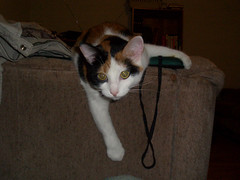 Maddy-cat
Mandee forced me to post something, so I'm doing it now before I forget and get in all sorts of trouble.

The interesting thing I have for you today is the fact that my kitty likes to fetch. I purchased a bag of cellophane balls for the kitty play with and bat around. The surprising part was when the kitty started bringing them back to me (when she didn't lose them under the couch) for me to throw. Joni didn't believe it until she saw it, but she'll back me up: my kitty can fetch. Your cat sucks.
Collapse